The company has and continues to rely mainly on outside help to design its award-winning housewares. 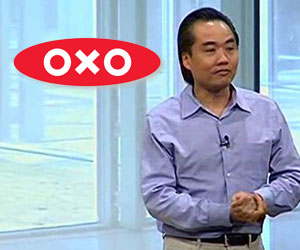 Does open innovation really work? Yes. Just look at OXO. The housewares company founded by Sam Farber in 1990 is thriving, with more than 1,000 products covering different areas of the home. Since Alex Lee succeeded OXO’s retiring founder as chief executive a year after signing on, OXO products have won numerous design awards and been included in the permanent collections of museums worldwide. I was delighted to interview Lee, a former product designer himself, about the company’s longtime support of open innovation and licensing in advance of the International Home Housewares Show in Chicago this weekend.

So, I wanted to know right off the bat: Does OXO really embrace independent inventors? Absolutely, Lee said, and then laughed. “Well, it depends on who you talk to, me or corporate counsel!” (In 2004, Helen of Troy became its parent company.) If the legal department had it their way, he explained, the company wouldn’t talk to anyone. “They’d have [inventors] sign away their first child. We don’t want to do that. That’s not our culture as a brand. We have an open dialogue with our users–we’re known for that.” OXO’s Facebook page is liked by nearly a million fans, he pointed out. (And in fact, Facebook tells me OXO “typically replies within the hour.”)

When people ask Lee where the company gets its ideas, his answer is always: Everywhere. To that end, he said, the company sources ideas from buyers, retailers, and design firms as well as grandmothers of the receptionists. “We’re always looking for what’s wrong and how to do better.”

A tradition of paying royalties is deeply ingrained in OXO. There are design firms the company has been working with since the beginning, in fact. “It usually takes a couple of rounds of projects for them to understand what OXO is and what we’re about. Then we hold on tightly. Because once they get up to speed, they’re very valuable. We have skin in the game; we pay them a royalty,” he explained. “Most products we sell we pay royalties on, actually, whether it’s to a design firm or an inventor.”

That’s not to say the company receives a lot of fantastic unsolicited ideas. For the most part, the same ideas are sent over and over again, Lee revealed. Many aren’t practical, unique, or feasible. After the submission is assigned to the appropriate team, the inventor will hear back. “There’s no fixed timeframe,” Lee said. ‘No this doesn’t fit us,’ the team might say. Or, ‘Yes, this is intriguing — let’s talk more.’

Which submissions stand out? Those that best capture the idea’s uniqueness. “If something’s already a proven concept, that’s more intriguing for us,” Lee said. That doesn’t mean inventors need to submit perfect prototypes he clarified. “If you claim your idea is going to do 1, 2, and 3, Frankenstein a mock-up. It doesn’t have to look good and it doesn’t have to look like a final product — just prove the function works.”

As far as protection goes, the company is reasonable. OXO typically does not sign confidentiality agreements, Lee explained, because the company is developing more than 200 new products at any given time. Instead, he recommends inventors protect themselves. “We don’t want a lawsuit. So, we want inventors to have some protection of their own… and to feel comfortable enough with us to have that conversation.” Notably, in the event there is a patent, Lee wanted me to know, OXO pays for the life of it.

OXO sets itself apart in that the company’s goal is to “sell products for 10, 20 years, and not 2.” In advance of the housewares trade show this weekend, I asked Lee about hot trends. His response was insightful. “We try to not follow fads. Our product development cycle is long; we invest a lot in every product. We are not… a very trendy company.” My first thought: What a fantastic royalty stream! Of course OXO is invested in maintaining its longstanding relationships with designers. They’re in it for the long haul. And really, that’s obvious from its homepage: The company is all about universal design. They want to make everyday items better. It’s paid off.

To me, this insight is priceless. What you’re really looking for is a home for your product, I always say. And what OXO is looking for is very specific. That’s true of every other company, as well — especially those that embrace open innovation. If you want to license your ideas to these companies, you need to understand their point of view, their philosophy. It’s crucial, really.

It’s true that to license an idea, you need to be persistent. But you also need to be tactful. When I asked Lee about what inventors shouldn’t do, he paused. “More than once, I’ve had people call my office when I’m out traveling and catch a voicemail with my emergency cell phone number on it. I’m in Asia, and I hear, ‘I’ve got this great million-dollar idea!’ That’s not a good start, I would say….” I agree.

My advice is to inventors is: Study OXO’s product lines very, very closely. Think more like a product developer than an ‘inventor.’ The company is all about taking everyday products and tweaking them slightly to be that much better. You do not have to reinvent the wheel — far from it.