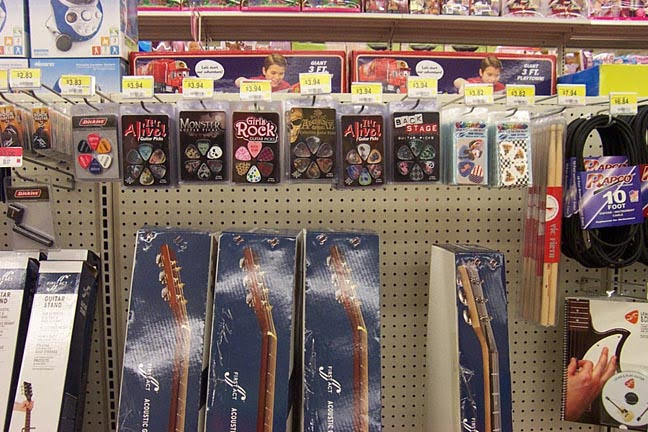 Last week, I told you about how my guitar pick company, Hot Picks, expanded beyond our own ideas and became Alchemy, Disney, and Taylor Swift licensees.

Would the music industry love our new direction as much as consumers did? Yes.

﻿With our new picks, we were a hit at NAMM, the largest trade show in North America for the music industry, that year!

In fact, we won Best in Show.

Even Nancy Wilson from Heart endorsed our guitar picks.

The last day of the show, someone walked by and said, “You should be in Walmart.”

This gentleman was looking for products to carry in Walmart. Specifically, he was assembling an end cap of products to place in the musical department. He asked to represent us!

We shipped our product to him, and he handled the rest.

When our product hit Walmart, it did extremely well — and that’s when Walmart reached out to us to become a vendor.

The paperwork alone took us at least 3 to 4 months to complete.

Before you know it, everything changed.

First, we needed a bigger office!

When the first order came in, we had to be creative in order to ship it on time.

We made it in time to load the Walmart truck.

And the next thing you know, we’re in Walmart!

We were even selling in 7 – Elevens.

Our guitar picks were also selling in some of the Disney stores as well.

We were now in thousands of stores across the world, including Walmart and Guitar Center.

We were selling in gas stations across the country.

We were even in stores in the UK and Japan.

Becoming a Walmart vendor took a long time. We clearly did not get there overnight.

At this point, we were one of the largest guitar picks manufacturers in the world.