How to License a Big Idea 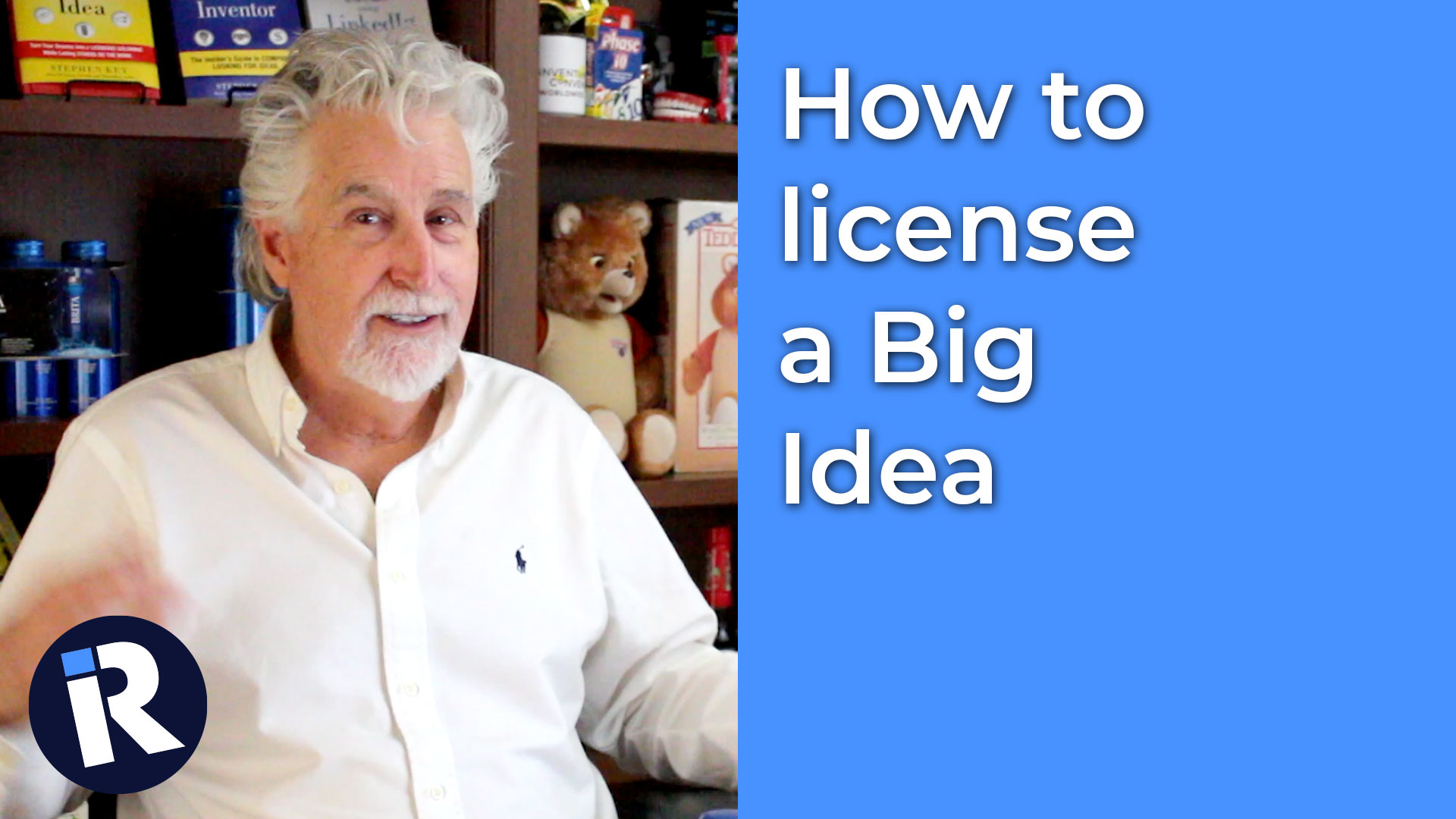 Watch the video to this article at the bottom of the post.

Hello inventors. It’s Stephen Key again. In this article, I will explain what you need to license a big idea.

Now, if you’ve been following inventRight on YouTube or social media for any length of time, you know that we showcase members who have licensed simple ideas across many different categories.

Here are some examples of simple product ideas that became licensing success stories.

One of my favorites is the Whiskey Wedge. It lets you keep your drink cold without having ice melt and dilute what you’re drinking. I love this idea. It’s such a simple idea, but it’s generated a lot of dollars in royalties. Which is understandable, because it’s a great product! This was invented and designed by Ryan Bricker.

Another one of my favorites is called the Glide Mat. Michelle Morrison created this product to help her move heavy kitchen equipment around on her counters. It sells out on QVC all the time. It’s a very simple idea, and I absolutely love it. If you read the Amazon reviews for this product, you will discover that consumers have found all sorts of uses for the Glide Mat.

Now, another simple product that I believe is doing extremely well, is called the Multi-Grip Mandolin. If you like to cook, you probably known about the mandolin. It’s very helpful when you’re chopping those vegetables into thin pieces, but you’ve got to be very careful or else you’ll cut your fingers. This safer version is another licensed product that’s doing well. It was invented and designed by Tim Brennan.

Another one of my favorites is called the Push & Hang, which has been selling on QVC and many brick-and-mortar retailers as well. It’s so simple. If you like to hang pictures, like I do, you need the Push & Hang. No tools required, and you will hang your artwork perfectly. Push & Hang was invented by Michael Van Horst.

Simple ideas get licensed all the time. At inventRight, we see products that get licensed in the pet industry, DRTV, hardware, medical — you name it.

But this article is about licensing a big idea.

So, how do you license a big idea? Well, the strategy you need is a little bit different from licensing a simple idea. Let’s get into it.

First, I want to talk about a big idea that I’ve been involved in licensing. Specifically, I’ve been in charge of the licensing and intellectual property protection aspects.

It’s called Fishbone, and it’s a big idea in the packaging industry. Fishbone was invented to replace the plastic rings used to carry packs of beverages that pollute our oceans and kill marine life. Plastic pollution is a huge problem in general, but these rings, they’re particularly awful. You’ve seen the videos of animals choking and dying on them.

It took a while to launch Fishbone, but today it’s in the market in a big way.

Fishbone is 100% curbside recyclable packaging for the beverage industry. I could not be more excited about what’s happening with this project. Everyone who is involved — from the cofounders of Fishbone, Kevin L’Heureux and Keith Elliot, to their licensee, Atlantic Packaging — recently achieved a real milestone.

For at least 38-40 weeks now, we have been talking about delivering a high-speed piece of equipment that can apply Fishbone packaging to 300, 400, 500 cans a minute. This is a big deal, because the higher the speed, the more cans and bottles, the more containers we touch, the more people we touch, the more impact we make in replacing plastic that would otherwise go into our landfills or our environment. (Very little plastic packaging is recycled.)

The feedback that we’ve gotten about this equipment has been unbelievable. To hear these larger brands say they like our system — every part of it — is just incredible.

Number one, your point of difference.

That’s right. There are going to be a lot of similar products out there. Your point of difference has to be very obvious, and it has to have somewhat of a “wow” factor. It has to be different enough for people to say, “Yes.” The reason why? It takes a lot of time, money, and energy to implement big ideas. So, your product idea must have a point of difference and a “wow” factor.

Number two, it has to be scalable.

You have to understand manufacturing, meaning how you’re going to implement it into a company’s existing supply chain. That’s not easy to do, because you have to determine how that product’s being produced currently and how your big idea is going to fit into the supply chain to get the improved product to all the stores where it’s selling across the country and potentially the globe.

Your idea, the idea that you’re going to license, has to be at a price point that’s very competitive with existing technology. If your invention is too expensive, it’s not going to work out. Even if your cost is very low, people might doubt you. So, your big idea must be made at a price point that works for the market.

Fishbone is extremely affordable and very competitive. A lot of time and effort was put into making that true.

The fourth thing inventors need to realize is that you’re going to need to build a team.

When you’re licensing a simple idea, you don’t necessarily need a team. You might need someone to build a prototype for you, eventually, if you need a prototype. But overall, I think you can license a simple idea yourself.

But with big ideas, you absolutely need a team helping you, and Fishbone has a great team. We have someone who understands design and packaging. We have someone whose expertise is in materials. There’s also someone on the Fishbone team who understands how to build machinery and someone who knows how to file the right intellectual property. It was a team effort that brought this big idea to market and licensed it to a very, very large company.

The fifth thing you’re going to need to realize is the importance of creating demand.

When you have a big idea that you’re trying to bring to market, there’s a lot of inherent risk. The best way to license a big idea is by showing demand for it, which takes away risk. There are a lot of ways to do that. If you get a big company to say, “We want it,” that’s one way to create that demand. That demand will help you pull your idea through. It’s very, very helpful to have demand for your concept or your product when it’s a big idea, because it takes away risk.

Here’s the biggest tip I have for inventors with big ideas. If you have a big idea that you want to license, but you’ve never licensed anything before, don’t start with a big idea!

Because licensing a big idea is never easy. It takes a team of people, including people who have experienced what is required to license a big idea. They have the right insight, and they realize it’s going to take time. It’s going to take money. It’s going to take patience. The ability to navigate all these moving parts to give a company confidence that you know what you’re doing is key.

There, I said it. Making people believe in you and be confident that you can get the job done is crucial to licensing a big idea. You have to file the right intellectual property, of course, and build the right team — all those things that I just listed. These actions take away risk, and they all add up to making potential licensees feel confident in you.

Thank you for reading. I will be sharing more about Fishbone soon. You’re going to see this invention everywhere on store shelves! It is a remarkable product, and I cannot thank Kevin and Keith, the two inventors of this technology, this new packaging innovation, for coming up with it and letting me be part of their journey.

There’s a great idea in each of us, and it’s truly magical to see it come to life. Sharing your creativity with the world has never been easier. inventRight can help.