The Revolutionary New Wearable You’ll Wish You Thought Of

Scrub Daddy has done $50 million in retail sales since airing on ‘Shark Tank.’ Here’s why CEO Aaron Krause isn’t resting on his heels–and what he’s up to now. 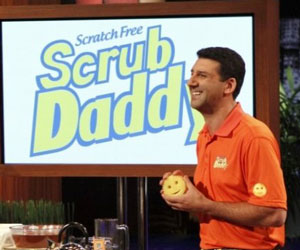 When Aaron Krause was young, he often stayed up late reading in bed. Krause is the inventor of Scrub Daddy, a kitchen sponge, and also Shark Tank’sgreatest success story. After burying himself under the covers, Krause remembers longing to be able to turn his overhead light off. So eventually, he developed a solution. Using casters and dental floss–the longest string he could find in the house–he devised a pulley system. Voila. Long before the Clapper, problem solved.

Krause continues to solve problems that vex him. His latest innovation is the Ion Belt, an attractive wearable that recharges your smartphone. “I travel frequently and these days, I’m tethered to my phone,” Krause explained. “I use it to communicate, to get around.” The fact that he was down to 20 percent by 11 o’clock in the morning many days merely bothered him–until it cost him. After having his phone die on him at a crucial moment, inspiration struck. He’d been carrying a charger around with him, practically in his pocket at all times, of course. But what if he didn’t even have to think about leaving home without his charger? He wore a belt everyday, after all. And he never had to machine-wash it. The concept dawned on him, and it felt big.

Krause partnered with Piers Ridyard–award-winning inventor of the Nifty MiniDrive, a device that adds storage space to MacBooks–to bring the Ion Belt to market. They launched a Kickstarter campaign for the patented technology last month. It was only in January of this year that Ridyard’s launch of a high-end smartphone-charging belt on a London catwalk attracted Krause’s attention. “I’m not an expert, and it looked like he was,” Aaron said. So he introduced himself. A half-hour meeting turned into 4-hour discussion, ultimately leading to the merger of their two companies.

So many inventors are afraid of sharing their ideas. Not Krause. “What I know best is that I don’t know everything,” he said. “I surround myself with people who do know. Yes, I’m an inventor. But I really think of myself as: Jack of all trades, master of none.”

I loved what Krause had to say about running a Kickstarter campaign. “I could not take on this endeavor, I couldn’t buy the inventory, without first understanding the market. I could have all the money in the world. I’m not going to be stupid with it. I want to let the market tell me what it wants.” He’s studying the orders as they come in and reading comments. What sizes do customers need? What colors do they want? There’s no need to guess. And now he has firm orders in hand. What he’s really trying to understand is the metrics of the market, he said.

Safety has been a primary concern for Krause. Encapsulpak, his and Ridyard’s proprietary technology, ensures the safety of lithium ion batteries held close to the body. “There’s as much electronic interference as a Furby,” Krause explained. He’s been wearing the belt for years now and only twice has he ever been stopped at an airport. Both times, the belt ended up being a non-issue. “We have many more ideas in the works. Think about it. Once you have power on your body… there are so many opportunities.” For an inventor, it’s a tantalizing thought.

For the time being, Krause says they’re focused on shipping pre-orders in June of next year. He assures me they’re “well on their way” and using Kickstarter to refine and focus more than anything else. A women’s belt is in the works. That’s merely the beginning.

What struck me about Krause in part is his desire to keep learning. I tell aspiring inventors to stick to just a few industries, particularly when they’re starting out. It’s easier to become successful that way. Krause admitted that prototyping the Ion Belt took longer than he anticipated. But he likes diving into new industries. He’s motivated to improve the world as he experiences it, whether he’s turning a critical eye to his son’s ice hockey gear or something else. Take his lead, and stay curious.