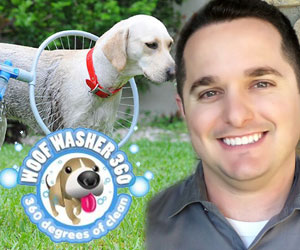 Who among us hasn’t dreamed of going viral? Talk about the ultimate gratification. We work so hard and for so long without knowing whether our ideas are ever really going to take off. The wait can be taxing. Should you stick it out? Should you move on? The answer is rarely clear.

For Ryan Diez, being patient has sure paid off. Since his marketing team uploaded a video of his new pet washing innovation to the product’s Facebook page on June 25, it’s been viewed no less than 60 million times. Holy cow. How does something like that even happen? I interviewed Ryan to get the scoop. He’s actually a student of mine, and I truly could not be more elated for him.

The truth is that Ryan has been trying to bring the Woof Washer 360 to market for a long time now. He loved his dogs growing up, he told me. Washing them frequently — less so. In fact, he and his father came up with a rough prototype of the idea for one of his school science projects.

Ryan licensed the idea to a company in 2009, but progress stalled, and the rights to his idea were returned to him in 2012. I met Ryan the next year, when he decided to become an inventRight student. Determined to exhaust all possibilities, he took my advice and decided to attend a trade show for pet retailerswith a prototype of the Woof Washer 360 in hand.

“I knew the interest level was there,” he explains. “It was obvious. I got a lot of business cards, made a lot of calls and got pretty far with more than a few companies, but in the end, they all said no.”

One thing he kept hearing, he says, was that the product was too large for retail. Companies liked it, they told him, but didn’t think it was a good fit.

At some point, Ryan realized he’d run through the list of potential licensees he had created. He’d heard via inventRight that As Seen On TV companies are receptive to inventors, so he reached out. He got close to a deal several times, but again — no dice.

Getting desperate, he reached out to a lead via LinkedIn. Fortunately, Matt Ackerman, president of R & H Direct, was there to answer. Matt took a chance on Ryan’s product. Had Matt brought a product to market before via DRTV? No. But his father had. And as he put it, “I liked it. I don’t have any pets, but I thought that it was a good idea.”

Clearly, a lot of other people agree. There’s a funny twist to Ryan’s viral media hit. The video the marketing team uploaded to Facebook wasn’t the infomercial that had been airing on a few networks the week earlier — it was shorter, composed of B-roll and soundless. The soundlessness wasn’t intentional, per se. But by the time Ryan’s team realized what had happened, it was too late. When Ryan checked Facebook the morning after the video was published, it had already been viewed more than a million times.

“We thought about fixing the sound, but I think that actually worked to our advantage,” Ryan says.

He thinks people didn’t realize it was a commercial, because it didn’t read like one. The video took off rapidly from there. The Huffington Post said it was “definitely the funniest way to wash your dog.” Buzzfeed went one step further and described it as “the best thing to ever happen to dogs.” (Caption: “Can they make one for humans too?”)

For now, R & H Direct has sold out of the product. Ryan and Matt both spoke about how much they’ve enjoyed and benefitted from bringing the Woof Washer 360 to life together. I’m thrilled to see an example of a partnership that is doing open innovation right.

Sometimes it really just comes down to timing. No one has a crystal ball, clearly. The only thing you can do if you truly believe in your idea is keep pushing, like Ryan did. Don’t stop until you find your super man or woman — that person who is going to champion you and your product across the finish line.

The reality is that many companies are so close to an industry that they can’t see anything beyond it. In this case, the industry experts were wrong. Matt saw the Woof Washer 360 and Ryan what for they really were: A potential hit worth betting on.