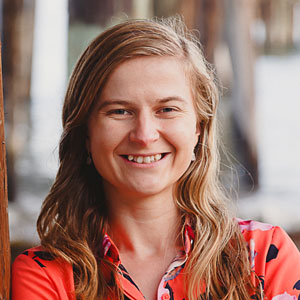 Courtney is an award-winning entrepreneur and successful inventor who licensed four product ideas to a company that specializes in outfitting dorm rooms. She later secured a second deal of two more products with the same company. As a child, she remembers making paper models of amusement parks and ski resorts that took up a whole room. She started her first business as a teenager while attending college. Selling online and at several events throughout the year, she learned the basics of starting and growing her own small business.

She’s also an experienced educator. For nearly a decade, she taught classes to youth about robotics, animation, and design through an educational non-profit. “Each of our classes consisted of teaching the students how to be life-long learners and how to be creative thinkers at a young age,” she explained.

She has been recognized for her achievements, including being the inaugural youth division winner of the Nexties Awards for Entrepreneurship, as well as the Bay Area winner for the National Center for Women & Information Technology.

Before she knew its official name, Courtney was sold on the concept of licensing. With so many ideas, why start a business for each one when you can license them, she thought.

“Licensing is deeply ingrained in who I am,” she said. “I can come up with all these ideas and focus my energy on creativity and innovation every single day; I’m so enthralled by this industry”.

As the longtime Managing Director of Inventors Groups of America, she runs online meetings for inventors that averages 250 attendees as well as produces a monthly newsletter and educational webinar series with guest experts.

“Inventors are dedicated movers and shakers who are constantly pushing their ideas forward. It is such an honor to be a part of the inventing community— it’s really inspiring.”

In addition to being a zealous advocate for inventors and the inventing community, and developing product ideas for companies, Courtney is a martial artist (Brazilian Jiu Jitsu and May Thai), ukulelist and latin dancer. She also enjoys golfing, photojournalism, and dipping her feet into new and invigorating activities.

I wanted to say how grateful I am for your caring and thorough coaching. It means a lot. So appreciate your honesty, good eye and kindness. You were a librarian in a past life. Always the right information on hand!!
Helen T.

I appreciate everything you have done for me as of today, you are an excellent coach and I respect your opinion. Thank you so much😌
Valerie W.

COURTNEY 😃 THANK YOU THANK YOU THANK YOU for looking up these products on Amazon you have no idea how happy I was when I saw your email 😊 you honestly created a paradigm shift in My Mind by doing that, It meant the world to me.
Saber A.

Oh wow, thank you for all of that! I’m so happy to have you as my coach. I won’t let you down!
Anita M.

Ahhhh! Thank you so much. I appreciate your words! They mean a lot to me. I have a rock star coach that is in it with me!!! You to go above and beyond. So thank you for being an amazing coach and going the extra mile to make sure progress is being made and I get my assignments and whatever information I need to understand. I really appreciate your insight and your willingness to help and add to my ideas to make them better. SO again thank yoooou!
Phillip H.

Coach Courtney goes above and beyond when coaching. She coaches the way SHE would want to be coached. She got to know me and my wife personally which really meant alot to us. Courtney is all about communication and connection because it helps her be able to coach us. She encourages as much communication as we can with her which makes us feel like we are able to get the most out of the program and that she’s totally willing to meet us where we are at and go at the speed we set no matter how fast or slow. She is very organized, efficient, has her own systems in place and has a great fun/serious sense of humor. She is emotionally invested in helping us make this the career of our choice as soon as possible. We really feel heard by her and know that together the 3 of us (and help from the whole IR community) will get us where we want to go sooner than later, THANK YOU FOR ALL YOU DO!! We HIGHLY recommend you!!

I can’t thank you enough, sharing your personal experiences are more powerful than just basic guidance, and that demonstrates how far you are ready to go for the success of your students. My next invention would be on how to implant your amazing personality into other people so we have a wonderful world…
Aron M.

I really appreciate you going above and beyond! Thank you for being there and getting me where I am! I can’t thank you enough! I couldn’t have gotten here without you in corner! Much love and respect ✊
Aimee S.

Courtney is truly an amazing coach. She has given me hope that I can actually get a licensing deal and is guiding me through the process to make it happen. I am so grateful I connected with her.

I always appreciate kicking things around with you and your gift for better terminology!
Christy H.

I truly enjoy and appreciate the feedback; I’m very fortunate to have you as my coach!!!
James B.

Courtney is an absolute talent! I’ve personally found her direction and guidance is direct, goal oriented and aimed at achieving results. Thanks for all the amazing content!
Mathew J.

See the rest of the team

inventRight has a great culture. Check out the rest of our amazing team of coaches, and staff.
View Team