Courtney Laschkewitsch always has ideas. By the time she was in high school, she already had 300 of them written down! She didn’t want to start a business, so she needed another way of bringing her ideas to life.

She started doing research and found Stephen Key’s book “One Simple Idea” and fell in love with the business model of licensing. After applying to colleges and getting accepted, she decided she did not want to take on any student loan debt. So, she began attending community college, where she took business courses, and started a small jewelry business. However, she knew that licensing was still what she really wanted to learn.

She wanted to enroll in the inventRight program, and needed to have her parents’ support since it would be an investment of her hard-earned money and time. After doing A LOT of research about inventRight and learning about the program, she finally enrolled in six months of bootcamp coaching.

Courtney’s experience was transformational. She not only made an investment in her education, she received emotional support from her coach. While in the program, she received a licensing offer, but it ended up falling through. Still, she felt more confident having gained the experience and felt prepared moving forward.

Later, when she reached back out to a company that she had originally shared her idea with, they were not only interested in licensing that product, they also wanted to license three additional products from her!

Courtney’s keys to licensing success are trusting in the process, persistence, perseverance, and believing in yourself. 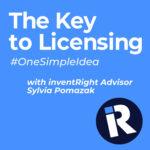